How NOT to Connect a Portable Generator

Generator backfeeding can result in death or injury to yourself or a utility worker, not to mention the destruction of your home.

Backfeeding is the tying of a portable generator directly to your home's electrical panel instead of using a transfer switch. It is dangerous. It is often illegal. And it should never be attempted under any circumstance.

The following is a true story submitted by Rick Berry, the Electrical Safety Officer in the Greater Victoria area, in Vancouver, Canada. Read it and understand why backfeeding is absolutely unacceptable.

Part of our inspection duties includes assisting the fire departments in determining fire causation when the suspected cause might be electrical.

To provide some background, our geographic area is often subject to wind storms coming in off of the Pacific Ocean, frequently called "The Pineapple Express" when a particularly heavy, wet, rainy storm comes up from Hawaii.

During one season, we had a particularly bad storm of longer duration and of stronger winds than normal. This was followed by several weeks of heavy rain that soaked the ground. The strong winds, combined with the soaked ground, caused a huge number of trees to fall throughout the area, taking out the overhead power lines with them.

The local utility was swamped with trouble calls and seconded all the private utility line contractors to assist them, but it still took time (some were out as long as 6 days).

Unfortunately, some people decided that they couldn't wait for the power to come back on and they took matters into their own hands, so to speak.

The story I'd like to share takes place in a rural area at a house that was already equipped with a standby generator, wired correctly, with an approved transfer switch.

However, the generator was sized for the minimum of loads (fridge, well, septic, freezer). The owner was having his staff Christmas party at his house and needed "a bit more power" for the big screen TV, karaoke machine, sound system, and flashing lights!

Being that he was somewhat of a self-proclaimed handy guy, he went to one of the local tool rental companies and rented out their last generator. After getting it home, he now had to hook it up to get the party started.

He looked at the generator output receptacle and realized that he had a cable in his shop with the same end on it. Hey, not only did he have a cord with the right end, but his electric arc welder outlet in the garage matched it too!

Was this his lucky day? I think NOT!

He proceeded to take the cord off of his welder and installed the other receptacle on the end. Yes... they are both MALE receptacles! He plugged one end into the generator, the other into the welding outlet on the garage wall, and being a "smart guy," went to the main panel and turned off any breaker feeding devices and equipment he didn't need. Except, he left the main turned on... The generator seemed to give him a few problems while it was running, but he made it work.

When the power was restored to the area, the neighbor noticed that the street yard lighting from our "handyman's" shop was on, but he could still hear the generators running...for now.

As he was getting ready to walk over to let his neighbor know that he could turn his generators off and run his party at 'full power', he said there was a loud "WHOMPFFFF" from across the field and then the sky lit up!

Thinking at first that the sound and light were fireworks (they were, but not that kind), he went back into his house to wake up his kids. By the time he came out, the rented portable generator, the side of his neighbor's house, the neighbor's motorhome/race car hauler, boat and his wifes SUV were all burning.

From what we could gather, piecing together this story (and the molten pieces of equipment) is when the electrical service was re-energized by the utility, it took them three tries to get their fuse and switch to hold.

But, by that time, the generator had melted/shorted shooting flames out from the alternator windings! 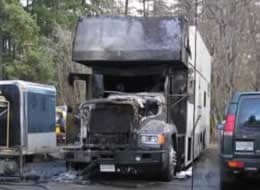 The flames caught the rubber tires on fire which then engulfed the generator with the top mounted gas tank (we think that was the first "WHOMPFFFF"). The flaming gas then ran down the slope of the driveway to the race car hauler. But, by then, it was "all over but the crying."

We, the local fire departments and our inspection office, use this story any chance we get to save lives by educating people about the dangers of improperly using generators.

NEXT: How to Properly Connect a Portable Generator

How to Connect a Portable Generator to a Home

How to Pick the Perfect Power Transfer System

How to Pick the Perfect Gen-Cord

How to Use a Generator and Stay Safe
Hide