How Do Generators Produce Electricity?

An electric generator is a device that transforms mechanical force into electrical current through a process called electromagnetic induction.

In contrast, an electric motor, made of the same components, acts in reverse where electrical current transforms into mechanical energy.

By knowing how a generator works to power the world, you can be better equipped when it comes to choosing one to keep the family safe in torrential weather, bring life to your next tailgate party, or to power tools to get the job done.

An electric generator isn't just some ubiquitous, utilitarian machine. Instead, generators are the lifeblood that keeps the world humming! Without them, we wouldn't have our modern-day amenities.

From your car's alternator to a home standby or job-site portable, to even the Hoover Dam - generators are seemingly everywhere. 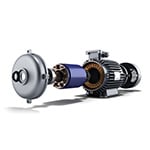 Think of a generator as an 'energy engine' that converts kinetic (motion) energy into electricity. A generator consists of a stationary magnetic field (stator) in which a rotating electromagnet (armature) spins to produce electrical current.

With a gasoline-powered generator, an internal combustion engine drives a rotating shaft that turns the armature. In renewable types of energy, wind, and water, for example, natural forces spin a turbine. If you think about it, any type of motion energy can be converted into electricity - just like hand crank flashlights.

Parts of a Generator

Learn the parts that work together to form a generator and the technology you should know when shopping for a generator of any kind. 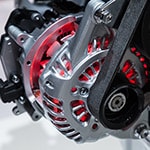 Many people ask, "What's the difference between an electric generator and an alternator?"

Although similar in design and principle, there are a few distinctions:

"But doesn't an alternator go inside a generator?" Sort of. Sometimes "alternator" generically refers to the joining of a rotor and stator as a part and not a standalone alternator.

It's what separates the best from all the rest. When it comes to knowing the ins and outs of generator technology, our factory-trained experts are here to give you the tools and resources necessary.

If you have questions or want to talk generators, give us a call.

NEXT: The Best Electric Generators
Hide